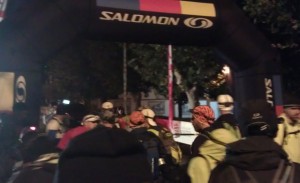 Thanks to the portugese trail organisation team. They did really a great job. Although it was raining over the whole day, they did really everything and took care for everyone and made it a great event.

The trail was very good marked. I never had a problem finding the way on the whole track. Mostly you had been guided by a marking every 50 – 200m at least. Even in the night, it was very easy to see all reflectors. There had been also a lot of backup markings, just in the case one got blown away by the wind. The man for setting the markings is a genius. All tracks should be marked like this.

The race took part in the beautiful landscape of Lousa. There had been many trails trough the wood, over rivers and some of them had been ascending steeply.

The trail started at 6 o’clock. The weather was fine in the morning. But during the day this should change.

At the beginning of the race has been, a walk next to aqueduct on the right side and the  left, it sometime goes down about 10-15 meters. And the path was sometimes only 1 m wide. This goes for about 1-2 km.

Everyone was just going in walking speed and it would be not possible to overtake others, since the path is much to narrow.

As this is the nicest trail in portugal, i had been told by portugese trail runners. They like it a bit warmer. During the day it was about 10-12 degrees. With a lot a wind, fog and rain. The way down through the wood, was sometimes like skiing and sliding.I found it very helpful to have my tracking poles. 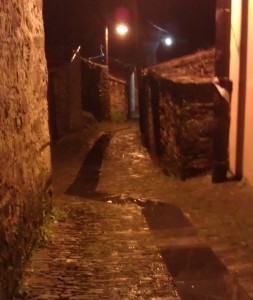 I would recommend to stay at the youth hostel just next to the start of the race. It is modern and well equipped. If you are lucky to get a place and book early.

If your to late for a hotel reservation, as I have been, you can stay at the ibis hotel in coimbra. A really good hotel for a fair price. Also it’s a quite nice location. 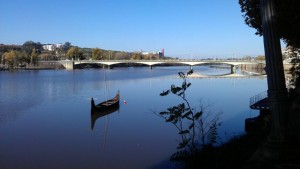 For me, using treking poles was a good idea. I could cushion my downhill run and use the poles for helping strongly move forward on passages, where you can support the legs.

I usesd to wear a raincoat, armlinge, a vest and a short trousers. That was efficent during the whole race. Sometime the windcoat missed windstopper a bit. So next time, when you can expect wind, I might be good to take a better jacket. You sweat in any way, and your clothes get wet. But when the wind cools you down, then that takes also a lot of energy.

Then you need good food. And that was the case on the utrax trail. Half the way, at km 45 you could get a warm tee made from special leafes (tasted a bit like peppermint) and a hot soup (pearl barley, chicken). That was als the point for sending your clothes to and where you could change them. Nice little villages in between. Build out of slate and with beatiful cenery around. Also the paths to the wood have been very nice during the time of the year (autumn).

The Saucony Xodus 3.0 had been quite a great help. They fit very comfortable, but also your feet fells free. They stabilize your feet well and also water goes out quickly, when you had to cross a river. Grip was also very good. Although it was very slippery, they did their best. Running downhill they felt good and the foot does not slip inside the shoe. During extreme angels downhill, the toes hitting the shoe cap in front, but still do not hurt you toes.

I was happy to downhill this time with no pain, since last time me knees haven’t been in that good shape,.I was able to finish the race. So this will give me 3 points for the UTMB. And i’m already planning the race. This will be Olne-Spa-Olne in Beglium and will start at the 24.11. with 68km and 2000m in height. I’m already espacially happy to be able to take part. Belgium and this area is a very nice place. Will be much coulder though. Hopefully it will not rain this time.